About Made in Swad

Hi, I’m Sarah. I work as a Graphic and Web Designer and I’m based in Swadlincote, South Derbyshire.

I grew up in Hartshorne (near Swad), where I lived with my mum and dad, big brother, some rabbits and a couple of cats. When I was young we’d walk to Carver’s Rocks and go swimming in Foremark Reservoir. We used to treasure hunt too in disused factories around Woodville, surrounded by unloved sanitary ware, sewerage pipes and old, crumbling bottle kilns.

I remember the miner’s strikes in the 1980s and my friends’ Dads and Grandads protesting around fires burning in oil drums. We never really appreciated how serious the situation was, but knew it affected nearly everyone in the community. During that time, Swad was full of hard-working folks, ‘salt of the earth types’ who were working in the potteries, factories and mines of South Derbyshire.

Eureka Park, Gresley Park and Swad Ponds were my teenage stomping grounds. My friends and I would be there (almost) every night – probably getting up to no good – and I have many happy times to remember. In the summer we’d bomb off to Ted Moult’s (now Scaddows) on our new mountain bikes and go strawberry picking. Eat one, put one in the basket, everyone did it!

In the late 1990s, I left for University where I studied for my HND in Graphic Design. I worked and lived in Nottingham for a few years, before moving back home to Swadlincote. What we’d known and loved as kids had gone. The potteries had almost all closed – apart from T. G. Greens – and the coalmines had shut.

As my friends and I reached our mid-20s, growth of The National Forest had begun. Trees were sprouting up from where there had once been a pit and lakes were beginning to fill old quarries. It was fabulous. We witnessed the regeneration of our homeland and all that was black started to become green. 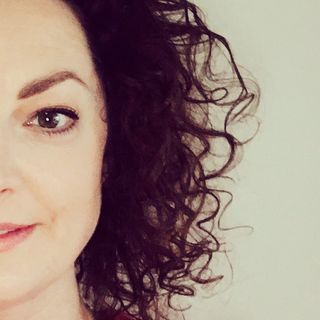 Now, my family and I walk in Swadlincote Woodlands; land that used to be the tip – and visit Sharpe’s Pottery; the building I’d grown up knowing as a ruined bottle kiln and factory. We admire the Tall Chimney from on top of the hill in Midway and we feel proud of the place Swadlincote has become. From Conkers and Albert Village Lake, to Bretby Hall – all these beautiful places are within walking distance of our house and it makes me feel very lucky.

With its industrial past, coalmine heritage and pottery, and its green landscapes with water and places for nature and people to thrive, it’s an amazing place. A town where everyone calls you ‘duck’ and we’ll always ‘be reet’; I wouldn’t want to live anywhere else. As they say in South Derbyshire ‘ The Earth Our Wealth’. Swadlincote, I love you.

During the COVID-19 pandemic in 2020, we (my husband, kids and I) spent much more time in the local landscape and I appreciated beyond words the town we have on our doorstep. Swadlincote is my home. I’m so proud to be a Swaddie. This is where the inspiration came from for my illustrations – a celebration of our shared heritage as well as our flourishing future.

Early in 2021 ‘Made in Swad’ was launched. My plan for the future is to have other Swadlincote and South Derbyshire inspired items available to purchase.

The illustrations are now available to buy as postcards, A4 prints, A2 posters, and tea towels. They make great gifts for local folks, souvenirs for holidaymakers, or can rekindle fond memories of Swadlincote for ex-pats.

Commissions are welcome, if you’d like something unique or personalised, get in touch! 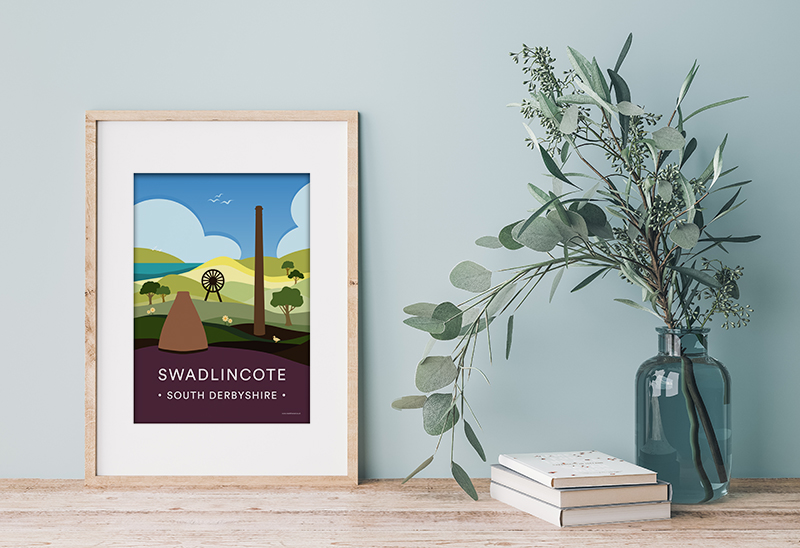 Commissions are welcome, if you’d like something unique or personalised, get in touch!

We use cookies on our website to give you the most relevant experience by remembering your preferences and repeat visits. By clicking “Accept”, you consent to the use of ALL the cookies.
Cookie settingsACCEPT
Manage consent

This website uses cookies to improve your experience while you navigate through the website. Out of these, the cookies that are categorized as necessary are stored on your browser as they are essential for the working of basic functionalities of the website. We also use third-party cookies that help us analyze and understand how you use this website. These cookies will be stored in your browser only with your consent. You also have the option to opt-out of these cookies. But opting out of some of these cookies may affect your browsing experience.
Necessary Always Enabled
Necessary cookies are absolutely essential for the website to function properly. These cookies ensure basic functionalities and security features of the website, anonymously.
Functional
Functional cookies help to perform certain functionalities like sharing the content of the website on social media platforms, collect feedbacks, and other third-party features.
Performance
Performance cookies are used to understand and analyze the key performance indexes of the website which helps in delivering a better user experience for the visitors.
Analytics
Analytical cookies are used to understand how visitors interact with the website. These cookies help provide information on metrics the number of visitors, bounce rate, traffic source, etc.
Advertisement
Advertisement cookies are used to provide visitors with relevant ads and marketing campaigns. These cookies track visitors across websites and collect information to provide customized ads.
Others
Other uncategorized cookies are those that are being analyzed and have not been classified into a category as yet.
SAVE & ACCEPT